Good news for boxing fans this week as it was announced, that the sport would be returning but not as we know it. Matchroom boxing announced this week Fight Camp but what is it? In this post I will be giving you everything you need to know before the first Fight Camp on the 1st August.

How Will it Work?

Fight Camp could fast become the new normal as we look to get life back to normal. It is the brainchild of Eddie Hearn. Now I know that for some strange reason Eddie seems to get a lot of abuse from boxing fans but this is great and really the only way to restart our sport. Basically the venue will be Matchroom headquarters in the garden, yes you did read that right in the garden. However what you have to bear in mind is that Matchroom HQ is a mansion set in acres of gardens it includes a gym and a swimming pool. 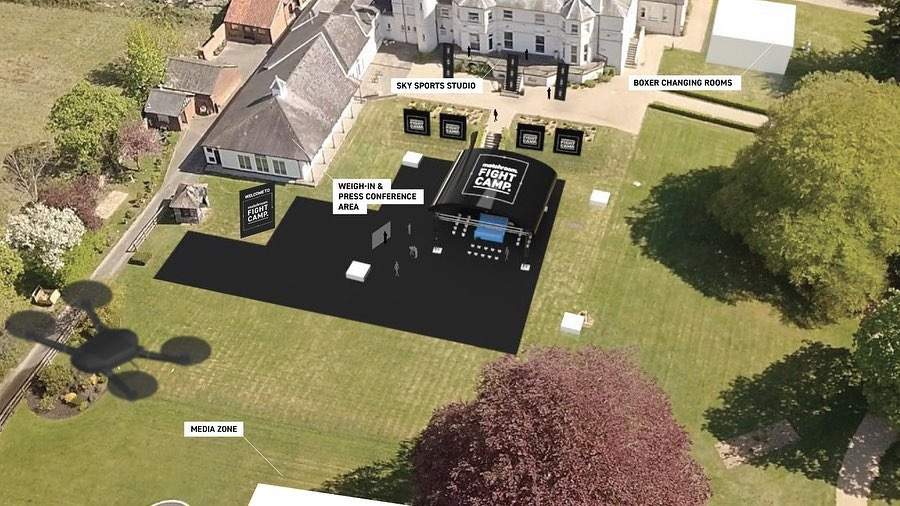 As you can see from the picture above it will be well spaced out keeping social distancing were it is possible.

The short answer is yes there is a hotel near to Matchroom HQ that everyone involved with the weekends fights will have to stay at this will include the fighter and their corner team and the TV production teams. When someone arrives at the hotel they must use the side door and take a test for COVID-19 only then will they get their room key, and they must stay in their room until the test results are back. Once the test results are back and they are negative only then will anyone be allowed onsite. Once on site nobody can leave for any reason or make physical contact with anyone outside of the Fight Camp until the event is over.

Who will be Fighting?

For all boxing fans this is probably the most important question, on Friday afternoon Matchroom announced 4 Fight Camps starting on the 1st August and here’s how they breakdown:

John Docherty against an opponent yet to be announced.

Where can you Watch the Fights?

Now we know where and who now we need to know how you can watch these fights. All the fights will be live on Sky Sports.

All except the Whyte Provetkin fight which will be live on Sky Box Office. Now I don’t know about you but I’m not the biggest fan of pay per view at the best of times, but especially at the moment when fans can’t get to the fights I think it is totally wrong. Normally when a fight is on box office they are pack with world title fights but this one isn’t. I understand that boxing is a business and you need to make money, and this will be a good night of boxing but not enough for it to be on Box Office.

As always I love to hear what you guys think how excited are you about boxing been back? Is Fight Camp a good idea? What fight are you looking forward to the most? Please comment below and let me know your thoughts.