On Saturday night Dillian Whyte put himself in pole position to get a shot at Deontay Wilders WBC title after out pointing Colombian Oscar Rives. However has he put all that in jeopardy as reports have emerged that he tested positive for a banned substance.

At a packed out O2 arena Whyte put on a boxing masterclass to win a unanimous decision over the previously unbeaten Colombian after surviving a knockdown in the 9th round, to win the fight 115-112, 115-112 and 116-111 on the judges’ cards.

Earlier this week reports emerged claiming that Whyte failed a drugs test on the 17th July, and his promoter and the British Boxing Bored of Control knew about the result before the fight nevertheless the fight went ahead as planned. 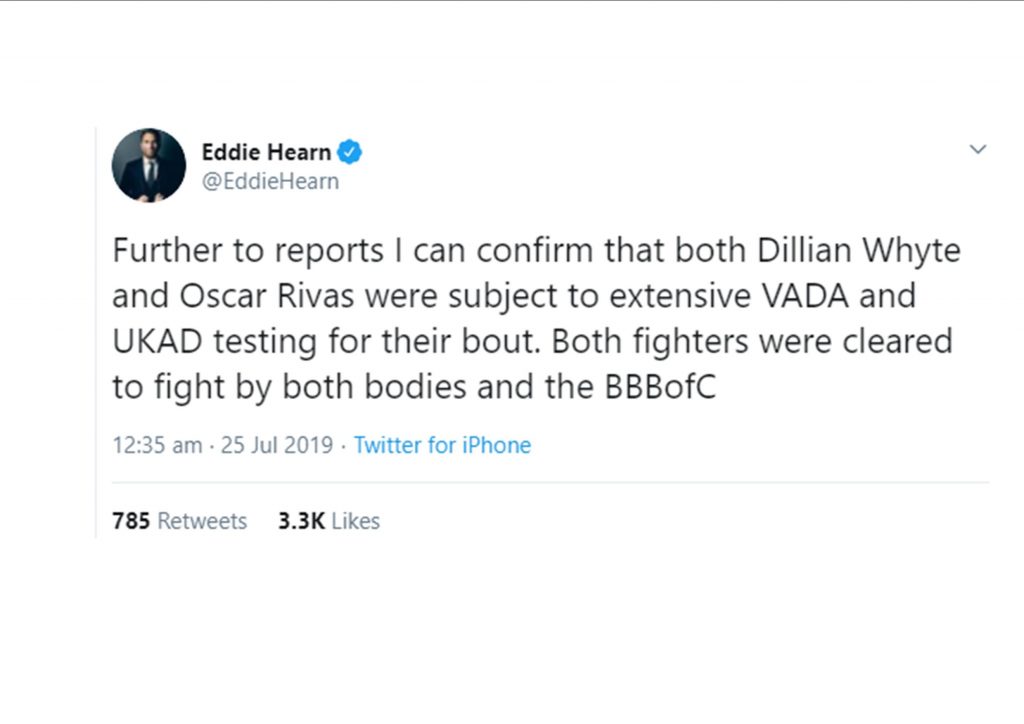 As you can see he says that both fighters were cleared to fight on Saturday night but surely if you where 100% sure that your man was clean you would have come out and categorically denied that Dillian Whyte had done anything wrong.

So what happens next the UKAD have declined to comment to what will happen next with Whyte, but as we all know the B sample normally backs up the A sample, so it is looking increasingly likely that his case will be referred to the National Anti-Doping Panel.

The whole situation apart from been a real mess, could take years to resolve. It’s a similar situation to the Tyson Fury case when he was given a 2 year backed dated ban.

This is not the first time that Dillian Whyte has been in trouble with doping back in 2012 he was banned after testing positive for Methylhexaneamine.

At the moment however it is important to remember that nothing has happened yet so Saturdays result is still official and Dillian Whyte is still the number one contender for the WBC title, and his 10 fight winning streak goes on.

As always I love to hear what you guys think what should happen to Dillian Whyte if in fact he is found guilty again?