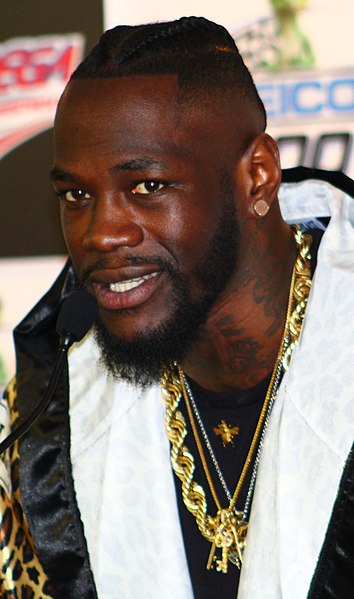 Last weekend Deontay Wilder joined a very elite group of fighters, when he successfully defended his world title for the 10th time by defeating Luis Ortiz with a stunning 7th round knockout. Although this is an impressive feat is The Bronze Bomber about to be defused?

Now I know what your thinking have I completely lost the plot when I’m talking about a fighter with an undefeated record of 42-0-1 with 41 knockouts, been past his best and been on the verge of losing a fight but let’s look at the evidence. In only one of his last 3 fights has he looked like the Deontay Wilder we’ve come to expect, and that was when he destroyed Dominic Breazeale in 2 minutes and 17 seconds of the opening round with a perfectly timed overhand right laying him out with one punch.

Before the fight with Breazeale he took on Tyson Fury in one of the fights of the year for 2018. However he was out boxed for large parts of the fight despite putting Fury on the canvas twice in the fight he somehow managed to scrape a draw in a fight that many people thought Fury won. Check out my post on this fight and all the controversy surrounding it.

The rematch against Tyson Fury is pencilled in for February and I firmly believe that if he uses the same tactics that he used in the first fight he will lose. As Fury now knows that he can take Wilder’s power and for a big man Fury has very good foot movement, hand speed and head movement as well as a very good chin.

This brings us to last Saturday at the MGM Grand in Las Vegas for the whole of the fight Ortiz was out boxing Wilder and he could barely land a meaningful shot and at times he looked clueless and like he didn’t want to be there. That is of course until the 7th round when he wiped Ortiz out with a huge overhand right. At the time of the stoppage all three judges had Ortiz up, 59-55 on two cards and 56-58 on the other.

In his last 3 or 4 fights you can definitely see a blueprint for beating Deontay Wilder keep him on the end of your jab, keep moving and that will frustrate him which will then leave him open to bigger shots. Another thing future opponents should try is to box him and not fight him because for a world champion he is severely lacking boxing skills.

The argument could be made that he is a bit of a one trick pony if he can’t land that big bomb like right then he’s out of ideas. Now I know all these things are easy to say and difficult to do especially when your in front of a man like Wilder and he’s trying to knock you out, and he’s not been world champion for so long for no reason however I think some of the fear factor of facing him has gone.

As always I love to hear what you guys think is Deontay Wilder on the slide? Please comment below and let me know what you think.

2 thoughts on “Deontay Wilder: Is Bronze Bomber about to defused?”