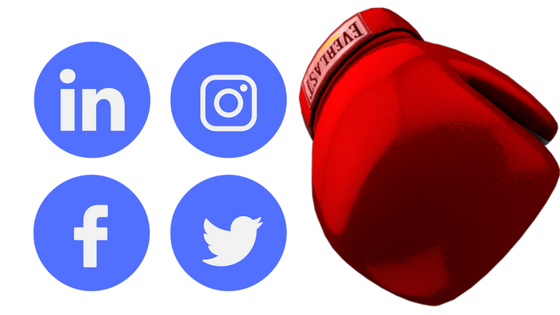 Over the past decade I think most people will agree that social media has changed our life’s, for both good and bad. So in this post I will be looking at the role of social media within boxing.

These days all most everyone who’s got a computer, phone or indeed any device that can connect to the internet has got some form of social media account, and boxers are no different. They have without question given fans and pundits alike access to their favourite boxers like never before because now all you have to do is login type a message and hit the send button and if you use a hashtag you can often get millions of people involved in the conversation.

Most of the time boxers use their accounts to interact with their fans, or trash talk with other boxers this often ends up with the pair meeting in the ring because fans get involved and build it into a big fight. I can think of a number of fights that either wouldn’t of happened or wouldn’t have been as big as they were without the help of sites like Facebook or Tweeter. Such as Froch Groves 2 or Haye Bellew. Boxers often use their accounts to post pictures and videos of themselves in training so that fans can stay up to date with their progress. Or they will run polls to ask the fans who they should fight next.

However it’s not just boxers that have accounts almost all promotional companies and promoters have accounts and they use them to help promote upcoming fights or events and they will post links to were you can buy tickets. They also use them to share any news involving their fighters or just about boxing in general. One of the best things that promoters use their accounts for is showing live streams of press conferences and the weigh in, in the build up to a fight.

So I think you can see how the growth in social media has help grow our sport and get more people involved in it which can only be a good thing. However what happens when an account is miss used, which is exactly what happened a few weeks ago. 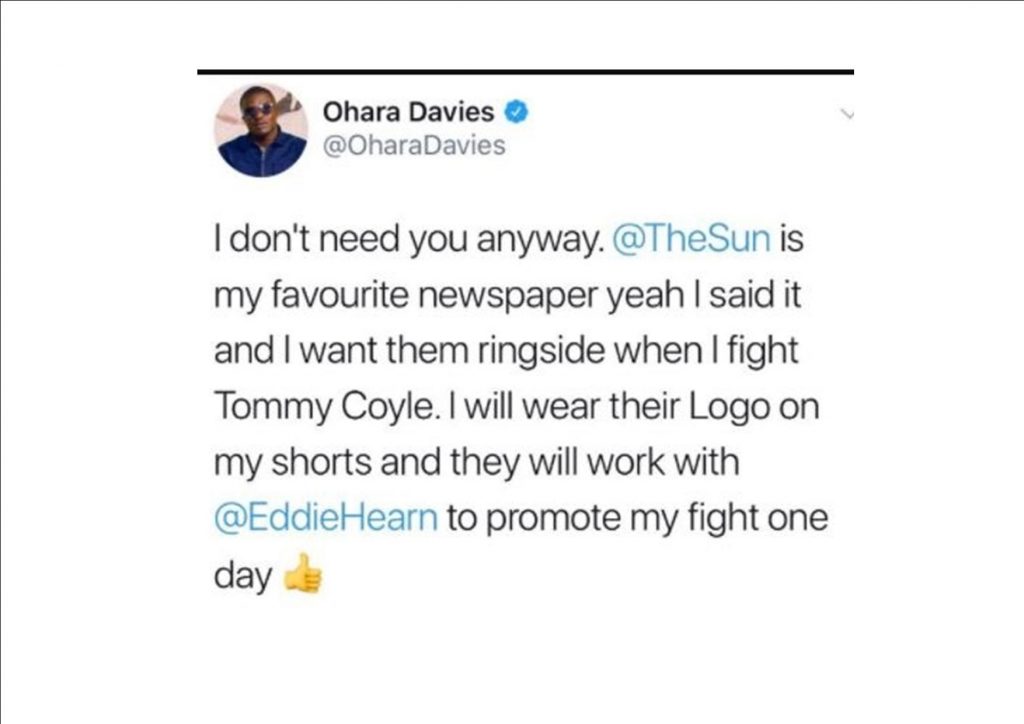 Coyle who has all ways been vocal about the way The Sun newspapers reported the Hillsborough disaster, Which is probably why he posted it to get a rise out of Coyle. However this backfired big time as within minutes of him posting the tweet hundreds of fans took to Tweeter to express their feeling on what many believe to be a disgusting and disrespectful thing to say, many also retweeted the post.

The following day Davis’s promoters Eddie Hearn release this statement via Tweeter removing him from the bill at The O2 on the 3rd February. 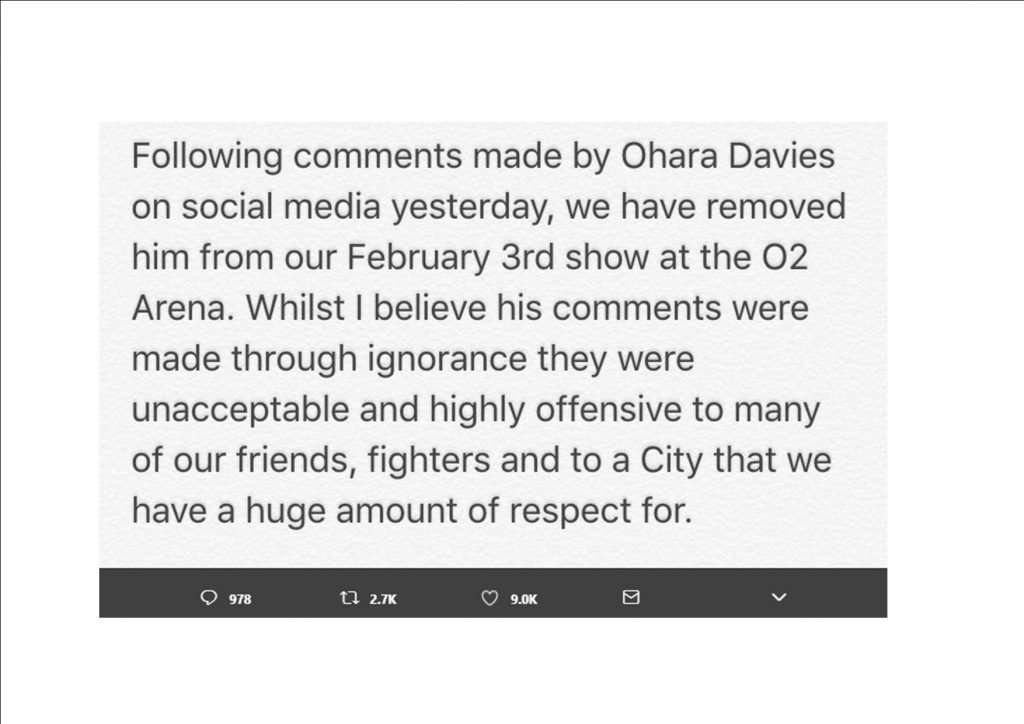 Many fans saw this as a good move from Hearn and praised him for taking action. However a number of fans accused Hearn of having double standards because he took no action when Anthony Joshua posted this tweet while having a conversation with Eddie Chambers. 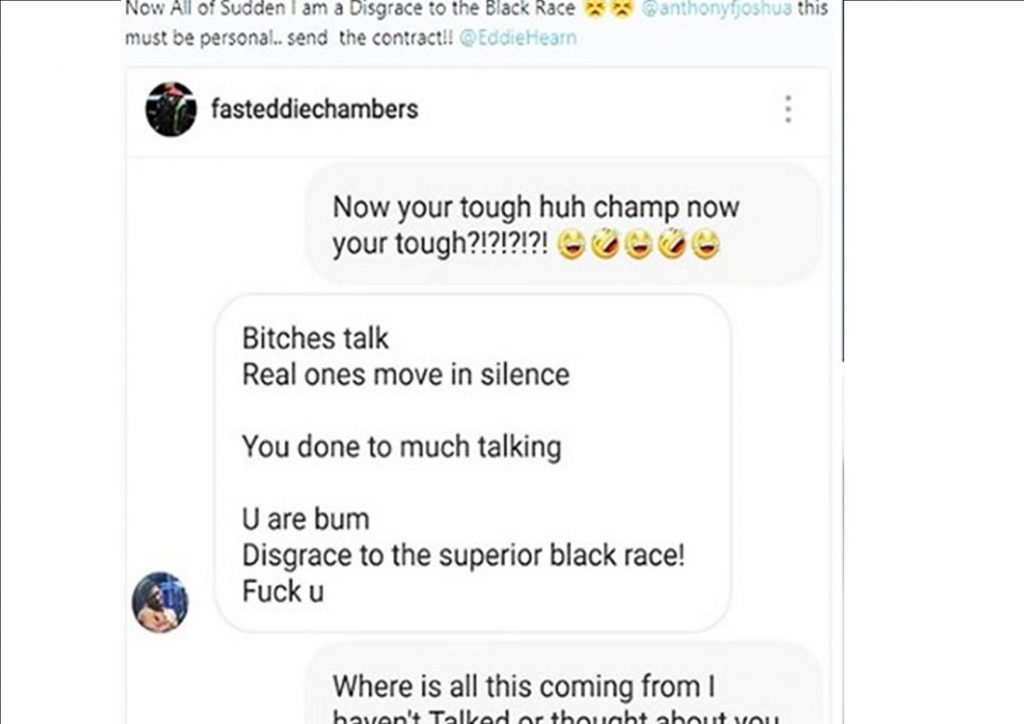 Now both fighters have apologise for their actions and deleted the tweets from their accounts, but what everyone not just boxers have to remember is once you’ve posted something online even if you deleted from your account it is out there somewhere all you have to do is Google it. So what I think boxers or indeed any celebrity should do is hire a social media manager to monitor their accounts that way things like this won’t happen again. Or if they don’t want to do that because they want to stay in complete control that’s fine just think before you tweet or post anything and that’s my advice to anyone not just boxers.

Please comment below and let me know what you think.

One thought on “The Role of Social Media Within Boxing”