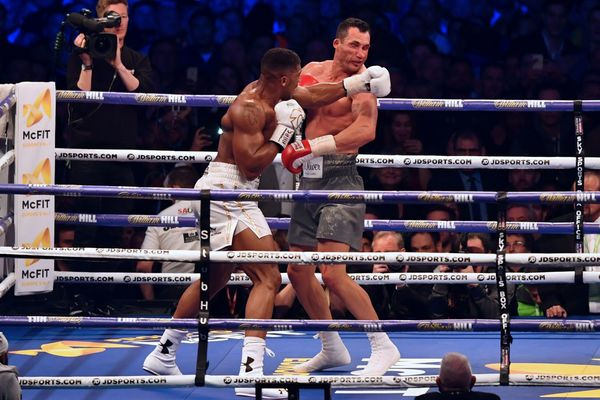 Four years ago this month Anthony Joshua had just made his professional debut in front of a packed out O2 arena. Although people where predicting big things for him in the years to come I don’t think anyone could have predicted just how quick he would take the world by storm. So in this post I will be looking at just how in four short years he’s gone from heavyweight hope to heavyweight king.

He made his professional debut against the highly rated Italian Emanuele Leo. At the time I don’t think anyone knew what to expect from him as he hadn’t been seen in the ring in over 14 months since winning the Olympics. I think most people thought Leo would take him a few rounds because Leo came into the fight with an undefeated record of 8-0, but instead this happened.

After just a year of been a professional and building a record of 8-0 all of them by knockout.  He fought for his first title when he took on Bakhtov for the WBC International title. Bakhtov came into the fight with a record of 39-9. Many people thought this would be his biggest test so far but this is what happened

In this fight he added more gold to his trophy cabinet when he won the British and Commonwealth titles. Cornish came into the fight with an unbeaten record of 21-0, and many people thought this would go a few rounds and it would be a close fight.  However what actually happened was something completely different.

This was the fight that all boxing fans wanted to see, the pair seemed to  be on a collision course since they turn professional. This rivalry went back to when the pair fought in the amateurs, and the fight did not disappoint. This fight was also the first time we saw Joshua go past the 3rd round and was pushed in a fight.

If their careers keep going the way they are a rematch seems inevitable at some point.

In just his 16th fight he got the opportunity to fight for the world title against highly rated and highly talented American Charles Martin. Both men came into the fight with perfect records, and many people thought it would be a close hard fight but Martin couldn’t cope with Joshua’s hand speed or power.

After making two successful defences of his world title in comprehensive fashion against Dominic  Breazeale and Eric Molina came the fight the world wanted to see. In front of a packed out Wembley Stadium he took on the legendary Wladimir Klitschko. This was a great fight and a possible fight of the year candidate. It was also the first fight were we saw what Joshua was made of because after knocking Klitschko down in the 5th, Klitschko put him down in the 6th and nearly took him out in the 7th before he scored the knockout in the 11th. In this fight he did a lot of things wrong, but I think getting put on the canvas will make him a better fighter going forward. Like it did with Ricky Hatton when he was knocked down in his fight with Eamonn Magee it made him a better fighter because after that he knew he wasn’t invincible.

The journey will continue on the 28th October when he defends his titles against Frenchman Carlos Takam in Cardiff, after Kubrat Pulev. Had to pull out with a shoulder injury Please comment below and let me know your thoughts.